Design a site like this with WordPress.com
Get started

With the advice of the doctor we started weaning George on purees at about 4 and a half months. But I always knew I wanted to do baby led weaning. We did BLW with Elsie and it was so much fun!

To begin with he just mushed it all up in his hands, I felt like it was a never ending battle. I just couldn’t get him to put the food in this mouth, he would throw the plates off the highchair or throw his food everywhere.

So a little bit of advice … Make sure you have a suction plate before you start the baby led weaning journey. 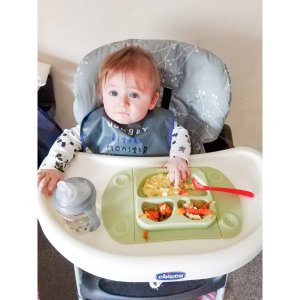 Baby led weaning can be daunting, especially for a first time parent. George is my third child, second one to do baby led weaning, and I still get petrified he’s going to choke. I researched so much when I did it with Elsie, but this time I’ve just sort of let him lead the way. When I know he hasn’t really eaten much I’ll give him a pouch after just so I know he’s had something to eat. He gagged on everything to begin with, but he’s getting much better at actually chewing the food instead of just trying to swallow. He even tries to use his spoon. I seen a post about the difference between gagging and choking when doing baby led weaning and it really put my mind at rest. I know what to look for when he’s choking.

So I pretty much give him whatever we are having for dinner; Fish, chicken, potato, veg. Lunch; scrambled egg, sandwich, wraps. Breakfast; porridge, toast, crumpets, weetabix. He has fruit and Kiddylicious snacks for midmorning and afternoon.

He loves being able to sit in his highchair and doing it himself. It’s amazing to see him with all the different textures and flavours.

We use the EasyTots Easy Mini Mat – it suctions to the tray so he’s not able to get it off. It also comes with a lid and ziplock bag, so we’re able to take a little picnic or dinner out with us in his mat and it won’t go everywhere. I highly recommend this weaning plate, it’s a must have! They come in different colours and they also do bowls and cutlery. Get yours here … EasyTots Mini Mat. If you use code LIFEWITHMYTHREE10 you’ll get 10% off your order.

George’s spoon and beaker are both from Nuby. The beaker is great for his little hands, the two handles either side make it easier for him to hold.

I’ll keep you all updated on how we get on. But so far he’s doing great.

4 thoughts on “The Beginning of Baby Led Weaning”